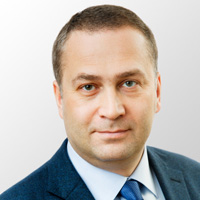 Dimitry Afanasiev is the Chairman and co-founding partner of Egorov Puginsky Afanasiev & Partners. The firm offers a full range of services across offices in Russia, Ukraine and Belarus, and associated offices in London, Washington, D.C. and Limassol. Egorov Puginsky Afanasiev & Partners employs 500+ staff, with nationals of over 15 countries, including USA, UK, France, Austria, Israel, Cyprus, Ukraine, Belarus, Russia, Kazakhstan and many others.

In 2010, the Financial Times listed Dimitry among the 10 most innovative lawyers in the world. Chambers Global and Europe, the most prominent legal guides, list Dimitry as an Eminent Practitioner, whilst Who is Who Legal tags him as a Thought Leader in their M&A ranking and a Global Leader in their Corporate Governance ranking. He is further recommended by leading directories such as IFLR1000 and Best Lawyers. Clients laud his experience and the depth of his insight, as well as his strategic advisory skill.

Amongst numerous accolades, Egorov Puginsky Afanasiev & Partners was recognised as “Law Firm of The Year: Russia & CIS 2021” by The Lawyer magazine, whilst Dimitry Afanasiev himself had previously been recognized as European Managing Partner of the Year.

Dimitry holds a state award as an Honoured Lawyer of the Russian Federation (2015). He was awarded the FAS Russia Medal “For Protection of Competition” (2019), the Order of Honor for merits in strengthening the rule of law and protecting the rights and interests of citizens (2019), the Medal for Distinguished Service in Defence of Human Rights and Freedoms (2015), the Medal for Professional Excellence (2004) by the Federal Chamber of Lawyers; in 2017 he received the National Award in the “Business Reputation” category, and was awarded the title “Honorary Lawyer of the City of Moscow” in 2019. He received commendations from the President of the Russian Federation for achievements in defending human rights (2005) and for active work on protecting the interests of the Russian Federation (2011).