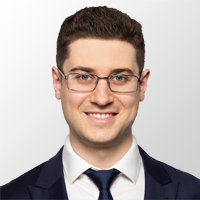 Ilya Novoselov specialises in litigation. Ilya advises and represents clients in cases before Russian arbitrazh courts and courts of general jurisdiction, as well as in administrative proceedings.

Prior to joining the Firm, Ilya worked at Russian and international law firms.

Ilya graduated from Lomonosov Moscow State University with a law degree in 2011.

He is fluent in English.