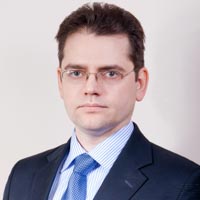 Anton Kleshchenko advises and represents clients in the electric power industry on the conclusion and performance of contracts by entities in the wholesale and retail electricity and capacity markets.

He provides expert assistance in the interaction of trustees with entities of the wholesale electricity and capacity market, as well as with commercial infrastructure organisations. He advises on technological connection and appeals against unlawful actions/inaction of grid organisations.

Anton is involved in preparing and supporting the review by the Federal Antimonopoly Service of Russia of claims of antitrust law violations in the electricity sector.

He also has experience in arbitration cases in disputes between commercial organisations in the energy industry.

Anton has recently been involved in projects such as:

Prior to joining the Firm's team in 2013, Anton was head of legal support at several major energy companies.

Anton graduated from Syktyvkar State University with a degree in law in 2001.

He is a member of the Moscow Bar Association.