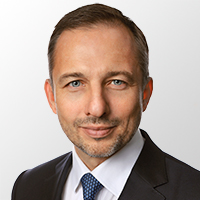 Valery Eremenko is a Co-Head of Litigation Practice. His experience in dispute resolution dates back to 1996. Valery specialises in corporate and antitrust disputes, as well as real estate, securities and intellectual property litigation.

Valery’s experience includes taking part in hearings of committees of the State Duma and the Federation Council and representing clients before various executive authorities. He acted as an arbitrator and is experienced in client representation in commercial arbitration cases in The International Commercial Arbitration Court (ICAC) at the Chamber of Commerce and Industry of the Russian Federation. He is also experienced in representing clients in separate investigative proceedings in criminal cases, involving economic offences.

Prior to joining the Firm, Valery practiced law in one of the Moscow bar associations, which he co-founded.

He is Deputy Chairman of the Presidium and an arbitrator of the Arbitration Centre at the Russian Union of Industrialists and Entrepreneurs (RSPP), and a member of the Moscow lawyers’ club.

Valery graduated from the Law School of Lomonosov Moscow State University in 1997. He has a PhD in law and is a graduate of the SKOLKOVO Business School and the International Institute for Management Development (IMD) LIFT: Leadership Identity Foundation and Transformation programme. Valery is a graduate of the SKOLKOVO School of Management "Leaders as Teachers. Tell your story".

Valery has been admitted to the Moscow Bar Association since 1998.

EPAM Partners Will Speak at the Pravo-300 Forum