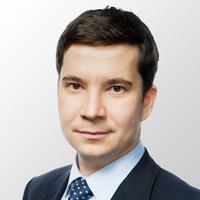 Vladimir Goglachev has over 10 years of specialised experience in advising on securities offerings, company reorganisations and general counsel in the financial markets.

Vladimir acted as team leader in a unique transaction in which a bond was issued and secured by a pledge of cash flow from the public partners in a PPP project (2020). The issued bonds were the first securities included in the MICEX's "social" bonds segment of the sustainable development sector.

As the head of the project team, Vladimir took part in the asset securitization transaction of Absolut Bank, in which, for the first time in Russia, the transaction structure was implemented in compliance with criteria of Annex 1 to Resolution of the Bank of Russia No. 647-P. As a result, Absolut Bank became the first originator of the mortgage securitisation transaction, calculating the credit risk value in accordance with a special procedure.

Vladimir was directly involved in the legal support and structuring of Russia's first securitisation project for non-mortgage loans (car loans), where a fundamentally new securitisation model was developed to ensure an optimal balance between project efficiency for the transaction initiator (Credit Europe Bank JSC) and securing investors' interests.

Vladimir is involved in drafting various pieces of legislation including a law on securitisation, risk taking instructions, and regulations governing the general meeting of bondholders.

As a lecturer at the MFC Institute, he developed and delivered an advanced training course for the Bank of Russia staff.

Prior to joining Egorov Puginsky Afanasiev & Partners, Vladimir spent several years as an associate in the Capital Markets Practice at Liniya Prava.