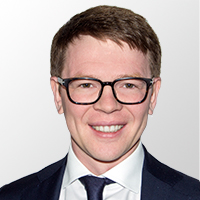 Lev graduated from School of law at Lomonosov Moscow State University and completed his Master’s degree at the Russian School of Private Law.