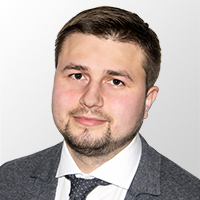 Dmitry Kukshinov advises and represents clients in commercial disputes in arbitration courts and courts of general jurisdiction. One of Dmitry's areas of specialisation is supporting bankruptcy cases. He has successfully defended a metallurgical holding before the Supreme Court of the Russian Federation, dismissed to challenge transactions in a bankruptcy case of a regional municipal enterprise, and defended a bona fide buyer of agribusiness in a bankruptcy case of one of the structures of the largest Russian agricultural holding.

Dmitry represents the interests of principals in disputes related to the execution of government contracts and corporate disputes.

Among his recent projects:

Dmitry also has  successful experience of defending clients in courts in cases of protection of honour, dignity and business reputation, divorce proceedings and paternity disputes.

Dmitry graduated from the Faculty of Law of Moscow State University. M.V. Lomonosov in 2015.

Attorney at law, member of the Bar Association of the Moscow Region.