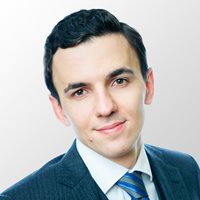 Denis Golubev advises and represents clients in commercial disputes in arbitrazh courts and general jurisdiction courts of all instances.

He has great expertise in both pre-action settlements and legal representation of clients in defamation disputes. His track record includes protecting the head of Russia’s largest aluminum company during the pre-action stage of a media-related claims settlement and in litigation involving business reputation and privacy protection. Examples of this include protecting a co-owner of a major holding (a former senator of the Federation Council) in a defamation case involving a State Duma deputy, and advising a top manager of a large transportation company as related to defamation in media and blogs, among other things.

Denis also advises on family law and often handles divorce proceedings, providing legal assistance as related to the division of property, obtainment of alimony, and child custody through legal proceedings. His clients are owners and top managers of the largest Russian companies and their family members.

Denis graduated from Saratov State Academy of Law (2010) and earned his master’s degree in private law from the Russian School for Private Law (2012).

Bill on the External Management of Foreign Companies