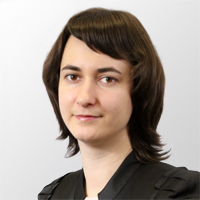 Elena provides consulting services and represents the interests of clients in M&A transactions, including within the media and banking sectors, in legal proceedings, and to ensure the recognition and implementation of Russian court verdicts abroad. She has extensive experience in supporting M&A deals under English law.

Elena also advises the clients on different matters relating to the processing of personal data, in particular involving cross-border transfer of data and structuring personal data processing by international groups of companies.

Elena is a member of the working group of The Federal Service for Supervision in the Sphere of Telecom, Information Technologies and Mass Communications (Roskomnadzor) Center of Competence in the field of "Personal Data". She participated in developing for Roskomnadzor a roadmap including a program of prevention of personal data rights violation.

She is recommended by authoritative rankings Best Lawyers and The Legal 500 in Corporate Law.

Elena is a member of the St. Petersburg Bar Association.

She speaks English and German.