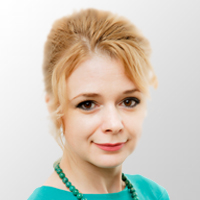 Maria Kobanenko advises and represents clients before the Federal Antimonopoly Service of Russia and Russian courts. Maria has extensive experience in the resolution of disputes related to state procurement, anti-competitive agreements, concerted actions, and the actions of business entities occupying a dominant position on the commodities market, as well as other antitrust disputes. Maria was involved in the development of the Fourth Antimonopoly Package and procurement legislation.

Maria has experience in drafting new laws and regulations, handling civil court cases, and providing legal advice in the field of corporate and antitrust law. She works mainly for clients in the pharmaceuticals, energy, fertiliser production, airport management, metallurgy, and oil transportation industries.

Maria graduated with honours from Saratov State Law Academy in 2003. In 2017 she earned a Master of Economics degree from Plekhanov Russian University of Economics.

Maria is accredited by the Ministry of Justice as an independent expert on anti-corruption regulations.

She is a member of the Competition Experts Association.