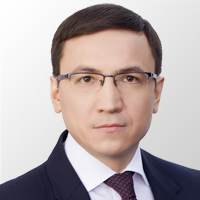 Ildar Mustafin specializes in representing clients at pre-trial and trial stages of criminal proceedings, in the course of criminal intelligence operations and prosecutor’s investigations.

Ildar has expertise and experience in the following areas:

Prior to joining the Firm in 2010, Ildar was employed (since 2006) as an investigator with divisions of the Russian Ministry of Internal Affairs and focused on investigations of official, tax and other economic crimes. Immediately prior to starting his employments with the Firm, Ildar was an investigator at the Department for Investigation of Organized Economic Crimes with the Main Investigative Directorate of the Ministry of Internal Affairs for the Republic of Bashkortostan.

Ildar graduated with gold medal from the Ufa Law Institute with the Russian Ministry of Internal Affairs (2007), the economic crimes faculty, where he studied law along with forces, means, methods and tactics of criminal intelligence operations. During his studies, Ildar had internships with the special criminal intelligence operations  departments of the Russian Ministry of Internal Affairs dealing with economic crimes and organized criminal activities. In 2002, Ildar graduated from the Kama Legal College specializing in Jurisprudence and majoring in   business law.

He has been admitted to the Moscow Bar since 2011.