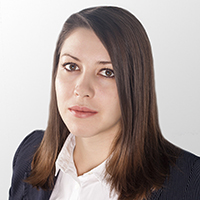 Alexandra Stelmakh advises and represents clients as related to bankruptcy, contract law, real estate and construction, as well as in disputes over the invalidation of non-statutory instruments, corporate disputes, and disputes over the recognition and enforcement of international commercial arbitral awards. Moreover, Alexandra often represents clients in enforcement proceedings and related disputes.

Her professional highlights include:

Alexandra has authored numerous pieces in the leading research-to-practice journals.

Alexandra has been admitted to the Bar since 2012. She is fluent in English.