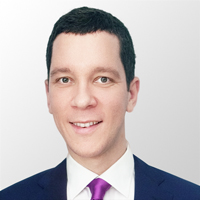 Dmitry Stepanov is one of the most respected experts on corporate and financial law. He is actively involved in the development of Russian law and has over 20 years of practical experience in areas such as corporate law, securities, restructuring and corporate finance, mergers and acquisitions, bankruptcy and arbitration proceedings.

Being actively interested in the fundamental reform of the Russian Civil Code, Dmitry was involved in creating of a new version of the Code as a member of the Non-Profit Partnership for Advancement of Corporate Law and as an active member of the Presidential Task force to create an international financial centre in Moscow.

Dmitry advised the Russian Ministry of Economic Development and the State Duma Property Committees and then the State Duma Committee on Civil, Criminal, Arbitration and Procedural Legislation on a wide range of major laws, including the federal laws On Joint-Stock Companies, On the Securities Market, On Insolvency (Bankruptcy) and On International Companies. He was also engaged in a joint project between the Inter-Parliamentary Assembly of the CIS States and the European Bank for Reconstruction & Development (EBRD) for drafting a Model Joint-Stock Law for the CIS countries.

Alongside his law practice, Dmitry teaches at the Statute Law School, and the M-Logos institute. He heads the Corporate Law Department at the Russian School for Private Law. Dmitry is the author of several monographs and around 100 publications.

Dmitry has been admitted to the Moscow Bar Association.

Tatyana Boyko and Dmitry Stepanov to Speak at the Conference “Corporate Law: Latest Benchmarks for Research and Practice”