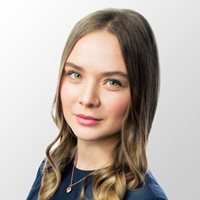 Anastasiya specialises in environmental law, technical regulations and subsoil use.

She represents clients in commercial courts and courts of general jurisdiction in matters of environmental management, protection and safety issues. Anastasiya advises on the enforcement of forest law and also in regard to obtaining and extending licences for the use of subsoil and natural resources. She has expertise in the resolution of disputes involving state authorities.

Her projects include the following:

Before joining the Firm in 2013, Anastasiya worked for over seven years for the North-West Branch of the Federal Service for Supervision of Natural Resources. As the Head of the Legal Support Division at the department, she provided legal support for the activities of the department’s subdivisions, was in charge of the control and supervision of all types of environmental monitoring, and represented the department’s interests before state authorities. She was involved in the recovery of environmental damages following an accidental spill of petroleum products, as well as in a number of cases related to the recovery of heavy fines imposed on corporations for environmental damage.

Anastasiya is accredited by the Ministry of Justice of the Russian Federation as an independent expert authorized to carry out anti‑corruption testing on laws and regulations.

In 2008 Anastasiya graduated from St. Petersburg State University, specializing in Natural Resources Law. She has been admitted to the Leningrad Region Bar Association. Anastasiya is a Member of the Environment and Energy Commission of ICC.

Anastasiya Boytsova Will Speak at the IDA Environmental Seminar

Online Discussion “The "Watershed" of Responsibility: How to Properly Regulate Legal Relations in the Field of Water Supply?”