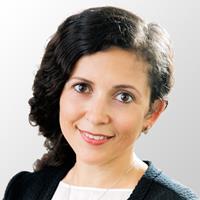 Vera Rikhterman specialises in representing the interests of domestic and foreign companies in litigations in arbitrazh courts and general-jurisdiction courts of all levels, particularly in the Supreme Court of the Russian Federation. Vera focuses on corporate disputes, contractual disputes, and has an extensive experience in legal counseling in bankruptcy proceedings.

Vera’s experience covers acting for clients in complex multi-jurisdictional legal proceedings, involving foreign parties, issuing opinions on the Russian law, as well as acting in arbitration proceedings and counselling on enforcement of judgments.

Vera has been engaged in most complicated matters in bankruptcy and dispute resolution and has litigated in over 20 Russian regions, as well as abroad.

Her most significant recent projects include the following ones:

In 2006, Vera graduated from the Moscow State Legal Academy with honors, and in 2008, from the Economic Faculty of the Moscow Aviation Institute. She defended her PhD thesis on the Legal Regulation of Judicial Restructuring of Joint-Stock Companies at the All-Russian State Tax Academy with the Russian Ministry of Finance (2010).

Vera has been admitted to the Moscow Bar Association since 2008.

ONLINE DISCUSSION “Liability of Governance Bodies”: Who Shall Be Liable for the Company? Guidelines on Doing Business”

Evidential value of forensic examination in arbitrazh proceedings. Legal aspects of the expert report assessment and the possibility of its critical perception | Vera Rikhterman and Vladimir Rodionov