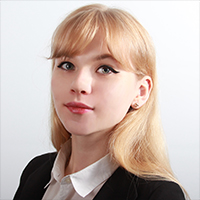 Arina provides a legal support on a wide range of issues of corporate and liability law, including support for M&A transactions, creation and liquidation of companies, business reorganization, due diligence, support for clients on corporate issues, support for various civil law contracts.

Arina graduated with the Bachelor's degree and the Master's degree from the St. Petersburg State University School of Law.

She is a member of the St. Petersburg Bar Association.

Arina is fluent in English.