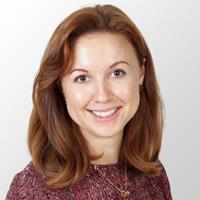 Olga Morozova has extensive experience in tax planning and structuring as well as a strong academic background in this area.

Olga specialises in tax and currency matters for private clients, supports M&A transactions, has considerable experience in advising on the tax aspects of corporate restructurings and deals with the tax implications of real estate transactions.

Olga's experience includes projects such as:

Prior to joining the firm, Olga advised clients on tax matters in a major international law firm and has worked for a leading Russian leasing company as a senior tax adviser.

Olga Morozova graduated from the Law Faculty of the Moscow State Institute of International Relations of the Russian Ministry of Foreign Affairs (MGIMO).

Olga has a PhD in Law and has substantial experience in teaching at the Moscow State Institute of International Relations of the Russian Ministry of Foreign Affairs (MGIMO). She is the author of more than 15 professional publications in the field of intergovernmental relations and fiscal federalism, taxation both in the Russian Federation and in foreign jurisdictions.

She is admitted to the Moscow Bar Association.

Olga is fluent in English.