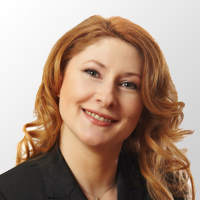 Anna Rusetskaya is a Partner and Head of M&A and Corporate Practice in the Minsk office of Egorov Puginsky Afanasiev & Partners. Her main areas of expertise include M&A, corporate law and privatisation, foreign investments support, banking and finance, capital markets, and commercial law.

Anna has advised on some of the largest transactions in the recent history of Belarus, including the debut Eurobonds issuance by the Republic of Belarus in 2010, and the entry into the Belarusian market of several multinational corporations.

Ms. Rusetskaya has provided legal support in a wide range of investment projects, including attraction and allocation of foreign investments in the Republic of Belarus, facilitating the obtaining of foreign loans, and performing counseling in such fields as securities and stock exchange operation.

Anna is recommended by various guides to the legal profession, including Chambers Global, Chambers Europe, IFLR1000, The Legal 500, Who's Who Legal: CIS, as a prominent Belarusian lawyer. She is praised for giving "attentive advice on business risks" and is called "marvelous" and "a great lawyer".

Registration of the Belarusian office of Appodeal Inc. as a resident of High Tech Park