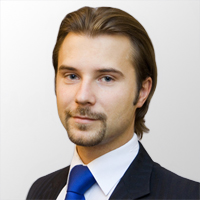 Sergey is a Counsel in the Litigation Practice at the St. Petersburg Law Office of Egorov Puginsky Afanasiev & Partners.

During his time at Egorov Puginsky Afanasiev & Partners, Sergey has represented clients in more than 500 trials in courts of first instance, appeal, and cassation, as well as in supervisory courts.

Some of Sergey’s recent cases include:

In 2005, Sergey graduated with honours from the St. Petersburg State University, School of Law. In 2008, he studied at the Academy for American and International Law in Dallas, Texas, USA.

A member of the St. Petersburg Bar Association since 2007, Sergey has repeatedly been recognized by the Association for excellence in the performance of his professional duties (in 2008, 2010, and 2012) as well as for his successes in providing representation in civil (arbitration) cases (in 2011).