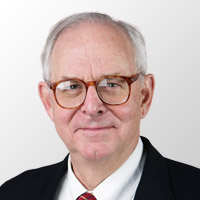 Allen Thomas is a dual qualified (US and England) international corporate and private client lawyer with more than 30 years of experience in international transactions.

After becoming a Partner at Egorov Puginsky Afanasiev & Partners LLP, Allen has represented a number of Russian and international companies in cross-border acquisitions and joint ventures and HNW (High-net-worth) individuals in a variety of private equity and related matters. He also advised a large Russian automotive manufacturer in its negotiations on entering into joint ventures with several large international peers, providing for technology and know-how of the foreign participant being transferred to the joint venture company, and advised on several IPOs on the Hong Kong Stock Exchange of international companies operating in Russia.

Allen has vast experience in contract law, including cross border M&A and joint ventures, shareholder agreements and know-how transfers. He has also advised on all forms of commercial contract drafting and negotiation, Private Equity matters, investments, and institutional lending.

Prior to Egorov Puginsky Afanasiev & Partners, he was a corporate partner in the New York based international law firm Paul, Weiss, Rifkind, Wharton & Garrison for 20 years and was the founding managing partner of the Paul, Weiss Hong Kong office, where he was involved in inward investment transactions into China from US, Asian and European companies and worked on the first nuclear power plant built in China, a JV between a HK power company and the south China power authority.

While a partner in the New York office of Paul, Weiss, Allen represented Mitsubishi Corporation of Japan and its international subsidiary Mitsubishi International, Inc. in a number of acquisitions and joint ventures in the US, including the purchase of interests in a copper mine in New Mexico and a division of Union Carbide Corporation. He also worked on the IPO of a Japanese bank on the NYSE.

Since moving to London, initially as the General Counsel of a large, privately owned, VC investment company, and qualifying as an English solicitor, Allen has represented a number of UK companies on a wide variety of acquisitions and other corporate matters.

Allen graduated from Wesleyan University and earned LL.B. degree at Yale Law School. He is admitted to legal practice in New York and Washington DC and qualified as a Solicitor in England and Wales. He is listed in Chambers Global, Who's Who in America and The Best Lawyers in America, The Best Lawyers in the United Kingdom.