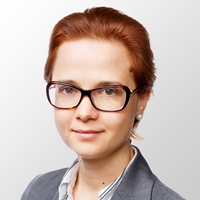 Tatyana Neveeva has an extensive experience in dispute resolution in courts and international arbitration, namely under the rules of the ICAC at the Russian CCI, ICC, SCC, LCIA.

Tatyana’s expertise covers representation of both Russian and international clients in international arbitration. Her current mandates include a number of disputes heard by ICC and the ICAC at the Russian CCI.

Prior to joining the Firm, Tatyana was employed with international law firms MacLeod Dixon and Magisters. Ms Neveeva has co-authored a number of books on law released by Thomson West and CMP Publishing International Law and Policy.

Tatyana is fluent in English and French.

She has been admitted to the Moscow Bar.

Online Meeting “London as a Seat of Arbitration”