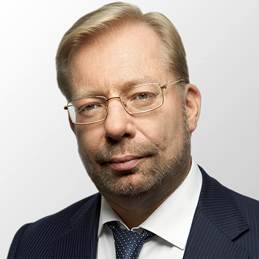 « Honoured Lawyer of the Russian Federation »

Stanislav graduated from the law school of Lomonosov Moscow State University in 1985. His legal career started in the Soviet Law National Academic Research Centre. Between 1988 and 1993 he dedicated himself to academic research in the Institute of Legislation and Comparative Law under the Government of the Russian Federation, where he obtained his PhD in Law in 1992.

Between 1997 and 1998 he held the office of Deputy Chairman of the State Defence Conversion Fund. Between 1999 and 2000 he served as Deputy General Director of the Russian Institute of Space Device Engineering.

In 2003 Stanislav Puginsky began working in government service as an advisor to a Deputy Prime Minister of the Russian Federation. In 2004 he was appointed as Deputy Director of the Federal Agency for Industry, where he coordinated the activities among the sectors of industrial manufacturing and was responsible for structural reforms of the industry, state property management, legal affairs, mobilisation training, informational and organisational support to the Agency's executive personnel, including information security.

He has been a member of the National Payment System Advisory Committee of the Chairman of the Central Bank of the Russian Federation since 2016.

He is a board member of the Association of Lawyers of Russia.