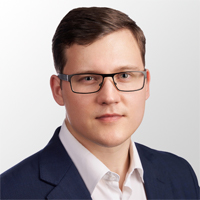 Nikolay worked as a prosecutor of the Prosecutor's Office of the Moscow Region, where he handled extradition cases, and where he worked as a public prosecutor for economic and official crimes cases.

Prior to joining the Bureau in 2021, Nikolay worked as a senior lawyer at the Zabeyda and Partners law office, where he defended clients in criminal cases of an economic and official nature.

Nikolay is recommended in individual rating of the Pravo 300 (Tier 1).

In 2012, Nikolay graduated from the Prosecutor's faculty of the Moscow State Law Academy named after O.E. Kutafin (MSAL), as well as postgraduate studies at the Institute of Legislation and Comparative Law under the Government of the Russian Federation (IZiSP) in 2017.

He has been a member of the Moscow City Bar Association since 2016.