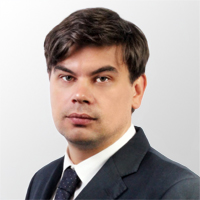 Ilya Tur specialises in advising and representing clients before Russian courts in various disputes, including those involving foreign law.

Ilya is experienced in working on complex corporate disputes, insolvency cases, real estate and asset ownership disputes, commercial disputes and other liability proceedings, and in recognition and enforcement of foreign arbitration awards.

Ilya’s high level of expertise was recognized by the influential Global Arbitration Review (GAR) 100. Ilya Tur has been named Lawyer of the Year for Litigation by Best Lawyers 2019. He has also been recommended by Best Lawyers as one of the country’s best dispute resolution attorneys.

A member of the St. Petersburg Bar Association since 2006, Ilya Tur has been recognized by the Association on numerous occasions. He has received several Success in Defending Business and Entrepreneurship awards and a Letter of Commendation for Professional Excellence.

Ilya has worked as a professional mediator since 2010. He is a member of the League of Mediators, which brings together specialists highly experienced in the resolution of business disputes of every degree of complexity.

He is fluent in English, and is currently studying French.

The lawyers from Egorov, Puginsky, Afanasiev & Partners have been selected by their peers for inclusion in the inaugural edition of the Best Lawyers® list for Russia