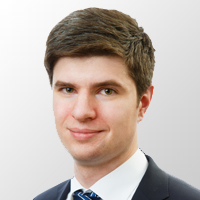 Denis has extensive experience working on the most sophisticated antitrust regulatory matters. He advises and represents clients before FAS Russia in the course of investigations on anticompetitive agreements and concerted actions, abuse of dominance, unfair competition, as well as in obtaining regulatory approvals on transactions, trade policies and agreements. He acts for clients challenging the decisions of FAS Russia before courts.

Prior to joining the Firm Denis spent 7 years working as Deputy Head of the Legal Department of FAS Russia where he managed the legal expertise and regulatory work departments.

Denis Gavrilov was involved in the development of the "Fourth antimonopoly package", being a co-author of the new Unfair Competition Section and the concept of the use of Russian antimonopoly legislation applicable in the field of intellectual property as well as key administrative regulations of FAS Russia. He has become one of the key originators of the Customs Unions’ and the Common Economic Space’s Model Competition Law, of the main legislation of the Eurasian Economic Commission’s on the application of the Treaty on Common Principles and Rules of Competition, as well as of the antitrust regulation section of the Eurasian Economic Union Treaty.

Denis is a member of the FAS Russia Centre for Education and Methodics and of other FAS Russia Expert Councils, and has been given a Letter of Commendation and an acknowledgement from the head of FAS Russia. He holds the title of Counsellor of State of the Russian Federation, 3rd class.

He is top-ranked by the GCR 100 as being among leading Russian experts in the field of antitrust regulation, and is recommended in Competition / Antitrust for Russia by the reputable international guide The Best Lawyers™.

Denis is actively involved in research and teaching regarding antitrust regulation; he holds the position of Deputy Head of the Department of Competition Law at Kutafin Moscow State Law University (MSAL).

Denis graduated from the Faculty of Law and completed his postgraduate studies at the Lomonosov Moscow State University (MSU), receiving his PhD in Laws degree. He is fluent in English.

Online conference on Cartels And The Pandemic: Latest Trends And Criminal Implications