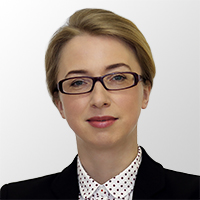 Daria advises Russian and foreign companies on issues regarding protecting, obtaining, and registering intellectual property rights, including trademarks and other industrial property, and on the strategic management of intellectual property portfolios. She is a recognized expert in copyright law, particularly in the fields of architecture and construction.

Daria also has significant experience of conducting due diligence and providing legal assistance for transactions involving the sale and purchase of intellectual property and companies that hold IP rights, technology transfer transactions, and drafting and concluding licensing and franchising agreements. She has a long track record of helping clients to protect commercial secrets, defend their business reputations, and curtail unfair competition.

Prior to joining the Firm, Daria Sergeeva served as counsel at the international law firm Borenius. Before that, she worked at Gazprom Neft, JetBrains, and the law firm Mannheimer Swartling, and led the legal department of a major Russian hospitality group.

The international ranking Best Lawyers recognises Daria as a “Lawyer of the Year” in Telecommunications and Technologies as well as recommendes her for intellectual property.

Daria graduated with honours from St. Petersburg State University, School of Law. She is fluent in English.

Online Discussion “New Developments in IP Statutes and Case Law: How Will Businesses Be Affected?”