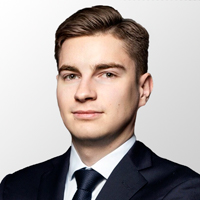 Before joining the Firm, Alexey worked in the Moscow office of DLA Piper and in a commercial bank.

Alexey graduated from the Faculty of Law of Samara University in 2016, and in 2018 received a Master's degree in Corporate Law at the Higher School of Economics in Moscow.

Alexey is fluent in English.